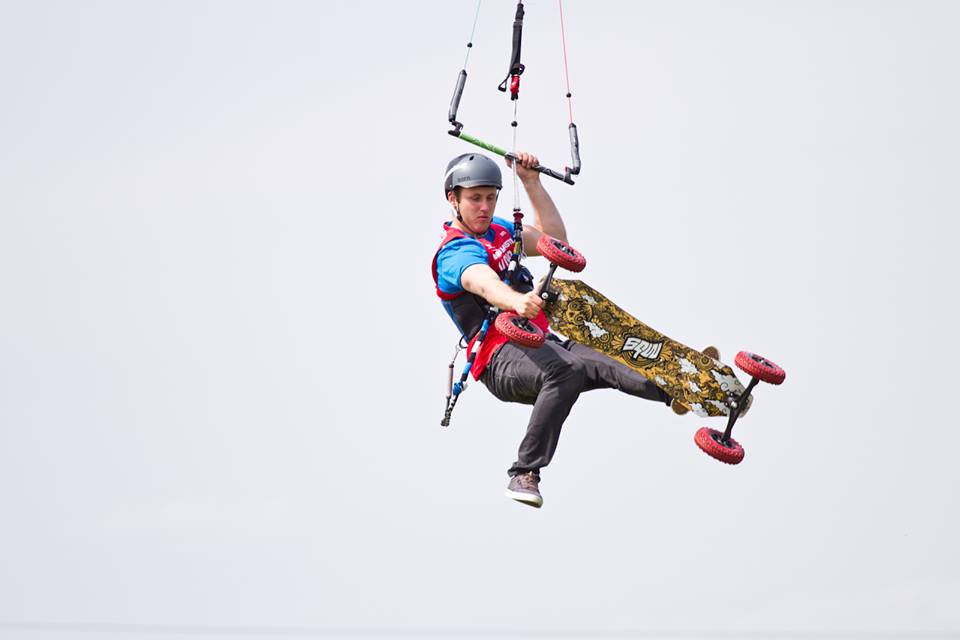 At the beginning of this month the first round of the RAWKite tour was hosted at Essex Kite Park. This is the second year of the tour and the event ran smoothly under the direction of FS rider Craig Sparkes who runs it.

FS rider Lewis Wilby was judging last year – but this year decided to enter. Here is his take on the event:

It’s been 5 years since I was last in the competition arena but this year things are going to change. I nervously signed up one week before the event and made sure I prepared myself for what was to come. Having just started riding the new Boost kites from Flysurfer a week earlier it was always going to be a risk riding such a unfamiliar kite, however I was confident the Boost was the right kite for this competition.

The event kicked off smoothly with the Landboard and KiteBuggy amateurs starting the event off well, giving a nice indication as to what kite size would be best to ride. It was actually looking like the 18m Speed 4 would be most suitable until two heats before when the wind finally came through. I dropped down a few sizes to the 13m Boost along with all the other competition riders.

My first heat was against Kris Beech, a good friend who I train with more than anyone else. We both know exactly what each other is capable of doing and knew the heat could go either way. The winner of this heat would be up against current UK Champion Ash Garwood so it was no easy come back. I rode a very smooth first heat only dropping one small trick (a pop shuv it), landing some big moves such as a the Double Frontroll Invert, Blind Front to Blind, Frontloop Board Varial and Shifty 3 whilst making sure I rode smooth with as much power and height as possible as the heats are judged on 5 new categories: Power, Amplitude, Technical, Style and Fluidity. I knew this judging format very well having judged the past seasons with the same points system. The judges thought I had rode well enough to advance through to the next heat against Ash, great start!

Riding against Ash was something I have done many a times, however the difference now was Ash was new to the sport back then and had now grown up to be the best UK rider having successfully won the UK title and coming second in the European Championships last year. It was likely going to be the toughest challenge of the day and even if I won there was a high chance Ash would come back through the doubles. I started the heat nicely but two dropped tricks early on and needed something big to open the gap. Luckily I landed a Double Frontroll Invert, powered Front to Blind and Shifty 3 with Ash missing his big handlepass meaning I had done enough to win my second heat of the day.

I met Will Rose in the next heat, Will was on a great run of form having already beaten current UK number two rider, James Tideswell (Floyd) and Steve Smith who was also on a come back like myself having been out for a few years. I knew that if I put another heat together like the first, I could be in with the chance of advancing straight into the final. I made sure I rode another consistent heat taking my third win of the day.

It was down to Ash, Kris and Will to battle it out for the final place in the final. Ash being the first to fall with a tough heat against Kris. Kris then put together an awesome heat against Will to progress into the final for a repeat of the first heat of the day.

The final kicked off and I started by landing a similar range of tricks to what I had done in the earlier rounds. This time though I had saved a few bigger tricks for the final nailing a perfect overpowered Slim Chance, along with a massive Double Frontroll Invert. The 13m Boost really suited the conditions perfectly and I only butt checked one trick for the whole final. I was confident I had had one of my best finals ever however this is not always enough. We had to wait a good few hours for the rest of the competitions to finish and prize giving to start to find out the final results.

Up next was the KiteBuggy Pro’s, the level of tricks in the final was amazing to watch – two riders with totally different styles. You had Dave Roberts, current UK Pro Champion throwing some massive airs with the craziest of rotations versus last years Ameatur Runner up Phil Revill, who had stepped his game up massively showing a much broader range of tricks and styles. With the 5 judging points previously mentioned all scoring one point each it was clear Phil had covered these much more effectively and took home a well deserved first place.

I was stoked to be announced winner with Kris and Will taking second and third respectively.
With the event effectively finished a day early and a switch in the wind direction it was looking like it would be nicer to hit the water for a session on Sunday. I headed down to “Uncle Tom’s” on the seafront with some friends to be greeted by 8 – 9m conditions and some fairly choppy water. I headed out, nicely powered on my 8m Cronix and the water flatted off nicely and had a nice end to the weekend throwing down some big airs and kiteloops. The next UK competition is the Ainsdale Cup and you can find more information by visiting the website here.

Phil Revill placed second in the amateurs last year so this year moved up into the pro category. Here is his round up:

It was great to be back riding with everyone again – I struggled to ride over the winter with work and family commitments, and the wind.

Luckily, that little test conversation you have with the other riders prior to the event revealed that the other guys as struggled to ride too!

I had been moved into Pro class this year, as well as “Seniors” – to be honest, I thought I’d perhaps put on a good show but I didn’t think I’d place brilliantly well in Pro Class.

Pros was first, there were 3 heats, with all three of us in first heat all on Flysurfers. I knew that as 3 of us would be riding together, it would be tight on space. Because of the way the heats were planned out, I also knew that the 1st heat was probably the most important.

Hooter went, and was determined to get the first trick in, but Dave Roberts hooned it across the freeride area, into the comp zone and did a big aerial trick. He timed that perfectly.

I went for my first few trick but did get a bit blocked in, so quickly decided to ride out the comp zone, back upwind and try and stay upwind right in front of the judges – I think this is what clinched it, I was able to pull some nice smooth technical tricks in between gusts. The judging has been really open these last two years, so I knew I also needed a couple of tricks with good amplitude (height) so somewhere towards the end of the round I took a big scoop of sky and went really big – luckily Graham (Reed) and Dave saw and where able to avoid me as I came in a bit hot.

At the end of the round, the three of us hung around in the comp zone, high fived, shared water, laughed a bit waiting to hear the judges call – then I heard “Next heat, Graham and Dave. Phil to final.”

I watched the 2nd heat from the freeride zone. Well, I say watched I kind of stared vaguely towards them with all sorts of stuff going through my head, and if I’m honest started to feel a bit of pressure build. So, I decided to just treat it like a freeride-with-purpose, and just go and have fun riding with Dave in the final – which we did. I realised at one point that Dave had ridden three rounds back-to-back, and I’d just had a nice break… Hmmm, will have wait and see when the medals get handed out.

In the Buggy Senior, after much shouting of “Nice cup of tea” and “Where’s your zimmer frame, Grandad” from the assembled crowd (cheers, guys – I do it all for you), Carl Kirton and I elected to run one mega heat rather than the 3 heats originally proposed, so again we went out, rode for fun (after us nearly wrapping our kites around each other about 5 secs in) we chucked some “disco hands”, foot outs, handplants (Carl’s hand plants are getting really nice) and had a great ride.

It’s really great to ride in amongst these guys at this level, you can really spot what each other is doing when you ride this close, and it really helps us progress our level.